How does a person get “right with God?” 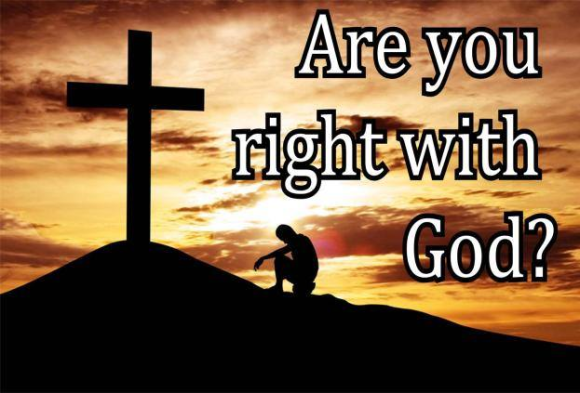 Gayle Phillips, a member of the Coffee with the Lord group reposted this from 2017… I had just finished reading Romans 5 today and was moved by its message of “How to get ‘right with God'” and re-read what I had written earlier… Decided to repost as Gayle had. It is a needed message today, believe me!

People try to get it in different ways… Some try good works – they think God will be impressed by that and say they’re ok with Him. Others try very hard to keep a list of religious rules … they really are working on a score of 98 or above on the “righteousness test” (and hoping God will accept a score of 75 on that exam). Some depend on church attendance or church membership. Others believe participation in significant religious rituals will win them God’s acceptance. Others could care less… they believe “a loving God” would NEVER withhold His approval – what they really think is that almost EVERYONE ends up being accepted by God! None of those things will work!

Getting right with God – being acceptable to Him and being righteous – is really not that difficult! Yet there is only one way to gain it according to the Bible… Are you ready for this? It’s “BY FAITH!” I read about it in my Bible reading this morning. Here it is…

Abraham was given a promise by God – what seemed to be an impossible promise. God promised something incredible to Abraham when he and his wife Sarah were far past the age of being able to have a child! And the Bible says, “In hope he believed against hope, that he should become the father of many nations, as he had been told… He did not weaken in faith when he considered the barrenness of Sarah’s womb. No unbelief made him waver concerning the promise of God, but he grew strong in his faith as he gave glory to God, fully convinced that God was able to do what He had promised. THAT IS WHY HIS FAITH WAS ‘COUNTED TO HIM AS RIGHTEOUSNESS.’ BUT THE WORDS ‘IT WAS COUNTED TO HIM’ WERE NOT WRITTEN FOR HIS SAKE ALONE, BUT FOR OURS ALSO! IT WILL BE COUNTED TO US WHO BELIEVE IN HIM WHO RAISED FROM THE DEAD JESUS OUR LORD, WHO WAS DELIVERED UP FOR OUR TRESPASSES [OUR SIN] AND RAISED FOR OUR JUSTIFICATION [i.e. to make us ‘right with God’]! (From Romans 5:18-25)

That’s how you get “right with God!” That’s the ONLY way God will consider you a “righteous person!” You’ve got put your trust in Jesus! You’ve got to believe that God will do what He said He would do because of what Christ did on our behalf! I’m so glad I did that! Hope you have as well!