The Politicizing of Politicians … Who You Going to Trust Anyway? 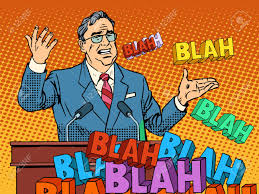 Well it seems the “politicizing” is in full swing as we approach another election cycle. To hear those running for public office you’d think the success or failure – the “heaven” or “hell” – of the entire nation, world, and even the universe depended on the ideas, initiatives, promises and leadership skills of those running for office. Those “from the other side” (and even previous leaders) are painted with the broad brush of the “catastrophic!” To hear them speak you’d think “the Messiah” is personified in their candidacy – or the candidacy of the person they are advocating!

Well, I don’t know how to break it to you… it doesn’t matter the party, the candidate, or the office… “it just ain’t so!”

The passage I read this morning should add some objectivity to the issue for those of us who reverence [“fear”] God and put our trust in Jesus, the “Savior of the world”…

“DO NOT PUT YOUR CONFIDENCE IN POWERFUL PEOPLE! There is no help for you there!

“BUT JOYFUL ARE THOSE WHO HAVE GOD AS THEIR HELPER, WHOSE HOPE IS IN THE LORD THEIR GOD! “He made heaven and earth, the sea, and everything in them! He keeps every promise forever! He gives justice to the oppressed and food to the hungry! The LORD frees the prisoners! The LORD opens the eyes of the blind! The LORD lifts up those who are weighed down! The LORD loves the godly! The LORD protects the foreigners among us! He cares for the orphans and widows, but he frustrates the plans of the wicked! THE LORD WILL REIGN FOREVER! HE WILL BE YOUR GOD THROUGHOUT THE GENERATIONS! PRAISE THE LORD!!!” (From Psalm 146 New Living Translation)

Hey, I’m not looking for more political commentary! I’m embracing the inspired advice of the Psalmist! I’m putting my trust in the Lord (and prayerfully participating in the political process as a “good citizen)… Just my two bits today after having had “coffee with the Lord!”