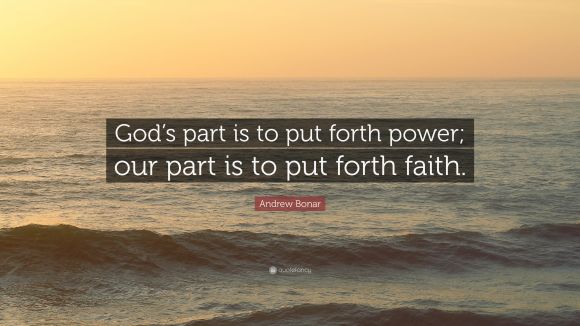 When God’s promises are fulfilled it usually takes both: Our faith-obedience and His power, our initiative at some level and His fulfilling-completing action!

Psalm 132 gives this appraisal of it… David desired to build a dwelling place – a temple for the Lord – but was unable… “Remember, O Lord, in David’s favor… How he swore to the Lord and vowed to the Mighty One of Jacob, ‘I will not enter my house or get into my bed, I will not give sleep to my eyes or slumber to my eyelids, until I find a place for the Lord, a dwelling place for the Mighty One of Jacob!”

God fulfilled that promise through David’s sacrificial giving and his son Solomon! “Arise, O Lord, and go to your resting place, you and the ark of your might! Let your priests be clothed with righteousness, and let your saints shout for joy! For the sake of your servant David, do not turn away the face of your anointed one. The Lord swore to David a sure oath from which he will not turn back: ‘One of the sons of your body I will set on your throne… For the Lord has chosen Zion; he has desired it for his dwelling place: ‘This is my resting place forever; here I will dwell, for I have desired it! … Her priests I will clothe with salvation, and her saints will shout for joy!’” God fulfilled through David’s son, Solomon, what began in David’s heart!

And the story from Scripture that illustrates the truth? … The Philistines, enemies of God’s people Israel, were prepared for an attack. The situation was dire! Israel was terribly outnumbered! Jonathan, king Saul’s son, said to his armor-bearer, “’Come let us go over to the garrison of these uncircumcised. It may be that the Lord will work for us, for nothing can hinder the Lord from saving by many or by few!’ And his armor-bearer said to him, ‘Do all that is in your heart. Behold, I am with you heart and soul!’” An expression, a faith action or initiative!

And God’s response to Jonathan’s faith? “And Jonathan said to his armor-bearer, ‘Come up after me, for the LORD has given them into the hand of Israel!” Then Jonathan climbed up on his hands and feet, and his armor-bearer after him. And the Philistines fell before Jonathan, and his armor-bearer killed them after him. And that first strike, which Jonathan and his armor-bearer made, killed about twenty men within as it were half a furrow’s length in an acre of land. And there was a panic in the camp, in the field, and among all the people. The garrison and even the raiders trembled, the earth quaked, and it became a very great panic.” (From 1 Samuel 14:6-7, 12–15 ESV) What followed was one of Israel’s greatest victories – the result of human faith response and God’s powerful action!