When the living Christ is involved “miracle moments” are always a possibility! 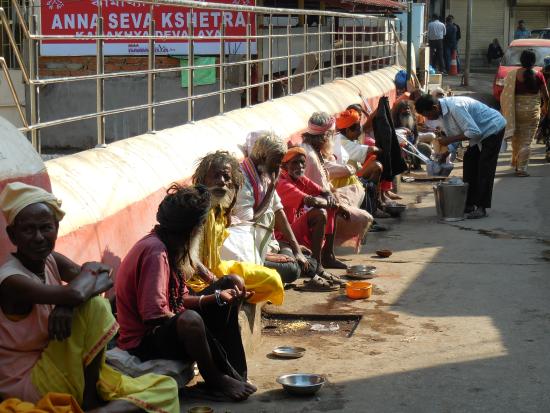 This morning during my time of “coffee with the Lord” I read a passage that brought some graphic scenes to mind – Acts 3:1-11.  Often in Asia or the Middle East beggars line the entrance to temples.  I’ve seen them often in these temples… The pictures I’ve posted are characteristic of those contexts…

Acts 3:1-11 is the account with such a scene as its background.  Peter and John were entering the temple counts at about 3 p.m., the “hour of prayer.”  A man lame from birth had been carried for years to the location where beggars often gathered asking for charity.  As Peter and John entered the man asked for alms.  Peter and John noticed him and he expected to receive some money from them.  Peter told the man, “I don’t have any money to give you, but I’ll give you what I have!  In the name of Jesus Christ of Nazareth, get up and walk!”  Peter then reached out, took the man by the hand, and somehow the man believed what Peter said and he tried to do what he had never been able to do before.  In that moment he experienced what I would call “a miracle moment!”  Strength came to his feet and ankles!  He stood up, began to walk, and then the miracle happened to him!  He “entered the temple, walking and leaping and praising God!

Now listen, I’m sure there were several – perhaps many – with needs in the temple courts begging.  I’m confident the lame man fully expected that day of begging to be no different than any other.  He was probably resigned to “living with his condition.”  But that day was “God’s day” for that man – He would experience a “miracle moment” because of the risen Christ.

Perhaps you’ve resigned yourself to an unpleasant, difficult, or even a chronic situation.  It has become the “status quo” for your life!  Jesus is alive!  He still performs miracles!  Nothing is too hard for Him!  When He’s involved… wherever there is faith in Him (even a glimmer of faith) there is the possibility of “miracle moments!”  God might have one for you today!  There may be a “Peter” or “John” nearby that God will use to challenge you to believe for something new – something better – even for what seems impossible to you right now…. and you’ll have your own “miracle moment!”

It’s possible you know!  Here’s how Peter explained it, “And His name – by faith in His name – has made this man strong whom you see and know, and the faith that is through Jesus has given this man this perfect health in the presence of you all!” (Acts 3:16)  Hey listen… Through faith in Christ, God may have a “miracle moment” for you today!